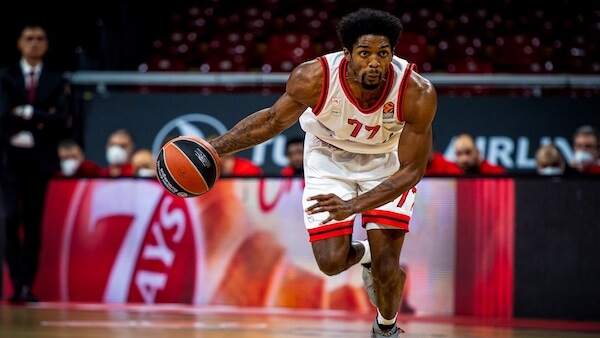 McKissic agreed on a 2 year extension with Olympiacos!

Shaquielle McKissic signed two years extension with Olympiacos and will stay at Piraeus till summer of 2023!

The Reds announced officially the agreement: “Olympiacos BC announces the extension of its co-operation with Shaquielle McKissic. The American guard will remain an Olympiacos’ player through the summer of 2023.

“It’s an amazing feeling”, Shaquielle McKissic said to olympiacosbc.gr. “I’m extremely grateful and happy to be able, at some point, to play in front of our home crowd. This is the most important thing for me! First of all, I would like to thank the Presidents, Mr. Giorgos and Mr. Panagiotis Angelopoulos, from the bottom of my heart, as well as coach Bartzokas for the great opportunity they are presenting me with. Their move to renew our co-operation before the end of the season is certainly a sign that they believe in me. Now, it depends on me to deliver on the floor and try to help the team win another Euroleague. Last year, I came here close to the end of the season, so this season is practically my first official one with the League. I’m learning a lot and have the opportunity to gain stability in a place I can call home. I’m very happy here and I hope I co-operation continues beyond 2023!”

His stay in Piraeus had been his utmost desire for some time now and he had said so plenty of times. Talking about the reasons that ignited that intense desire, he said: “The bond within the team, as well as with the fans is a unique one! Being in an amazing country like Greece and in a wonderful city I can call home, is something that cannot be compared to anything else! I feel calm and secure here. I also don’t feel pressured. I haven’t felt pressured since my first Olympiacos-Panathinaikos derby. Since having passed that test, everything became easy somehow. It’s the place I want to be in. I’m happy here. I think that I still have butterflies in my stomach despite having already signed, just thinking about the future. It’s really exciting”.

Finally, he did not omit sending a message to our team fans, that have ‘embraced’ him since moment one. “To all the fans that have supported me… To those who have contacted me through social media and despite having tried to reply to them all, I can’t seem to be able to pull this through now, since it has become sweeping through time, but you should know that I read all your messages… I would like to say that I’m extremely grateful to be playing for Olympiacos, a team with a fanatic audience, that love you despite winning or losing, so long you give your heart to the cause, because that’s what’s really important. I hope we have many, many more years together and we are going to be able to achieve some major goals. Thank you for always supporting me and I hope to see you soon at our games!”.